At the End of the Line

On a dry and windy Las Vegas afternoon, a body lays motionless on the concrete floor of Silver State Wire Rope & Rigging. His torso is cracked and broken, fragments of his arms are scattered around the room, and his legs are wrapped around each other. A crowd of onlookers simultaneously gasps at the sight. It is not a good day to be Bob, the company’s test dummy. This was his last starring role in Silver State Wire Rope & Rigging’s (SSWR&R) weekly demonstration where entertainment and construction industry professionals witness the effects of improper rigging and the fatal impact of a 10-foot fall on the human body.

Mounted near the demonstration, Rice Lake’s 720i programmable indicator displays the actual weight placed on the 240-pound test dummy as his 10-foot drop ended violently in mid-air. When the steel rope suddenly tightened on his harness, it exerted a 4000-pound force sending Bob into early retirement (forces exceeding 1000 pounds are typically considered fatal).

Constructed in January of 2011, the demonstration has been a valuable teaching aid. Klaus Damm, of D&G Scale, installed the load cell and indicator. “They custom-built a huge frame and needed to know the loading value, so I chose the 720i weight indicator and a Rice Lake load cell,” Klaus explains. “The 720i’s peak-hold feature made it an easy sell because they needed to display the highest weight value incurred during the test. Once they saw how it worked it was a no-brainer.” Klaus continues, “Initially a competitor’s indicator was in place. It also had peak hold but it didn’t work properly. The way it updated versus Rice Lake’s 720i digital weight indicator was no comparison. The 720i displays values in almost real-time whereas the competitor’s had such a lag that it was ineffective for an audience watching the remote display and not seeing accurate values as the demonstration was taking place. With the 720i, the audience could see the values rapidly change during the demonstration and with a press of the PRINT key the peak hold value was displayed.” 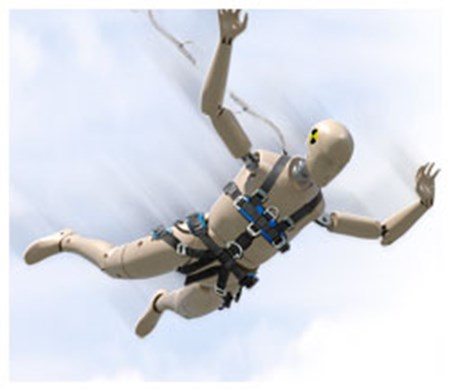 It was not a good day to be Bob, company's test dummy.

Prior to the installation, SSWR&R verbally described which rigs and situations can create a fatal fall. A 10-foot fall being lethal was difficult for skeptical audience members to believe. Actually seeing the 4,000-pound shock value resonates the gravity of the situation.

Since test-dummy Bob’s departure, SSWR&R has replaced him with a 240-pound test weight to simulate a suspended worker. The hoist lifting this test weight is an invaluable and widely used tool in the entertainment industry. The hoists are used to raise and position sound equipment, trusses, lighting grids, graphic panels and virtually everything else used for setting up and running the type of show one might see on the Las Vegas Strip. However, positioning these items takes a delicate hand. “The operators know they’re supposed to make a smooth and consistent lift but that isn’t always the case,” says Andrew Rogers, crane and hoist shop manager of SSWR&R. “In reality, they get the equipment close to where it needs to be and then repetitively tap the LIFT button to fine-tune the height.” This creates a dynamic shockwave through the system, often resulting in a load spike equal to 200-300% of the actual weight being lifted.

Illustrating this dynamic shockwave is also part of the demonstration. Silver State uses a hoist to lift 400 pounds of test weights. In mid-air the LIFT button is tapped a few times to simulate the activity of a typical hoist worker. A press of the 720i’s PRINT button displays the highest value placed on the support cable during the process, 1,200 pounds. This has the potential to be a catastrophic problem because often, a hoist will be selected based on the weight being lifted; however, a more robust hoist is actually needed because of these transient load spikes.

Pete Rogers of SSWR&R explains, “The hoists are actually built for industrial use but the entertainment industry has gotten so big in the last 20 years their use in that industry has become widespread. Because the hoist appears to be large and robust, it is a very common occurrence for the operator to tap the LIFT button.” The operator may be using a single hoist attached to a piece of scenery or they may be using an entire grid with 200 hoists going to a truss and lifting a much more elaborate setup. Because no two motors run at the exact same speed, the operator commonly tries to maintain level as equipment is being lifted and does so by tapping that pesky LIFT button. “People don’t think much of it,” Pete continues. “But when they watch our demonstration it really drives the point home that they may need a higher capacity hoist or at least must be aware of how their behavior creates dynamic loading situations.”

In addition to accurately determining correct hoist capacity, another component affects dynamic load—geometry. The same weight and wire taken at different angles will produce different weight values. For example, if a 300-pound weight is suspended on two equal-length cables (known as a bridle setup) at 30 degrees below horizontal, one might think the weight on each hoist to be 150 pounds. However, because of the 30-degree angle, a multiplication factor of 2 must be applied, making the actual weight value 300 pounds on each hoist. The more the angle varies from 90 degrees off the horizontal plane, the higher the multiplication factor. 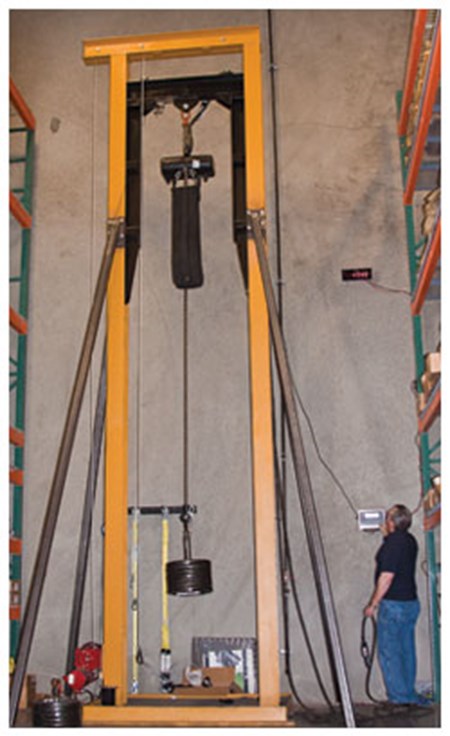 Displaying the 4,000-pound shock value resonates the gravity of the situation during SSWRR’s safety demonstrations.

Using the same setup as the test weight drop, SSWR&R illustrates the influence of how the geometry of a suspended load affects the tension. “People don’t realize that with typical rigging situations static weight is not always what it appears to be,” Andrew explains. “With geometry and dynamic loading it can be a great deal higher. There are certain pieces of rigging and sizes of rigging that need to be used for a specific load depending on the geometry or depending on the magnitude of dynamic loading. Either of these factors drive up those loads exponentially.”

Because of the rising popularity of shows that require more sophisticated rigging, hoist-related accidents have risen at a similar ratio. The entertainment community has incurred quite a few serious accidents, from Spider-Man on Broadway to the building of Las Vegas’ City Center during which six deaths occurred. A renewed emphasis on safety is promoted industry-wide. Intelligent and informed selection of equipment in rigging situations and the fall protection applications (which include the use of force-reducing components or shock packs) can potentially reduce the frequency of these incidents to zero. The test weight drop demonstration has become an essential sales tool for SSWR&R’s shock absorbers. After watching a fatal fall from six feet, the same fall is reproduced with a shock absorber installed on the harness. Instead of 4000 pounds of force, the test weights incur a painful, but not fatal, 700 pounds of force. “I wouldn’t want to experience that kind of force,” Andrew smirks, “but at least it wouldn’t be the end of me.”

In addition to rigging safety classes and demonstrations, SSWR&R performs hoist inspections. When the hoists come in workers disassemble and rebuild them, taking wear measurements as they work their way through the machine. Before the hoist can be certified, ASME B30.16 standards require a load test to be performed at 125% of its rated load. “Everybody can do that,” Andrew explains.  “It’s basically just testing that the motor is going to lift the load and the load is not going to slip. The cool thing about the setup we were able to do with Klaus is that we can also do a slip test.”

A hoist is required to slip at less than 200% of its rated load. With another 720i scale indicator and Rice Lake load cell, the operator can see weight readings in real-time with simulated weight, to the slipping point. “We can see exactly where it slips,” Andrew continues. “If it slips high we can adjust it down or vice-versa until it’s perfectly dialed in. We used to lift concrete blocks and were trying to simulate using hydraulic pressure off the gauge which was not accurate. That’s when we called Klaus and put together the current system that gives us an exact reading. It’s working wonderfully and saves quite a bit of time.”

With two 720i’s running the show, Silver State Wire Rope & Rigging have increased their testing efficiency and effectiveness in demonstrating safety. The only thing missing is Bob, the retired test dummy, resting peacefully in an undisclosed location. Asked why the mangled humanoid is kept, Pete optimistically replies, “Gentlemen, we can rebuild him. We have the technology.” 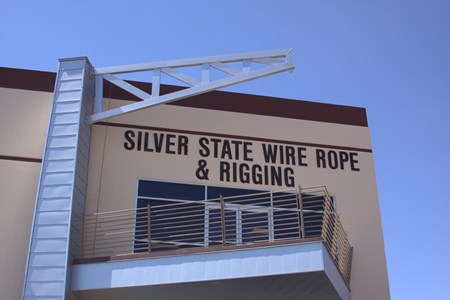 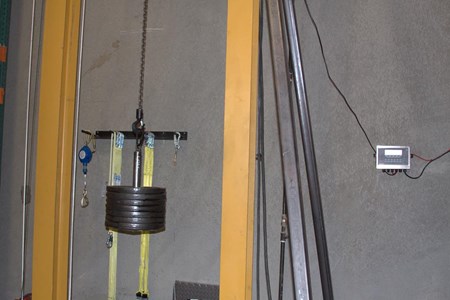 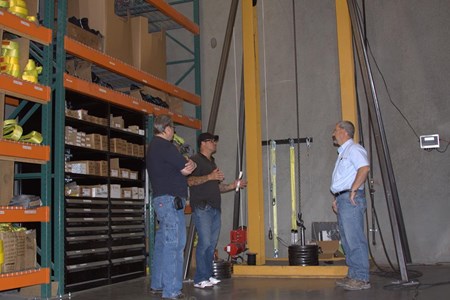 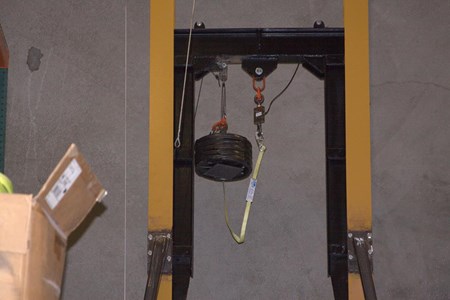 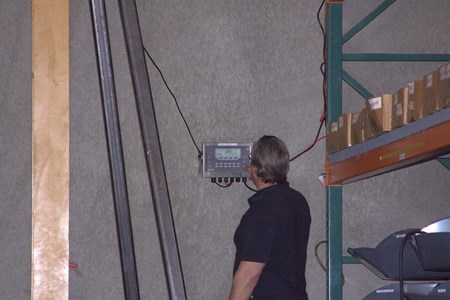 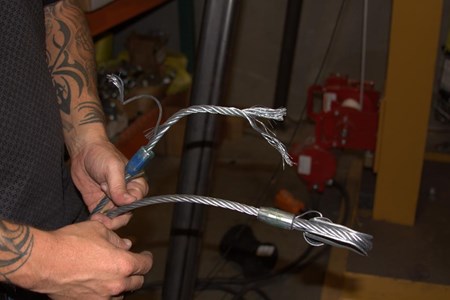 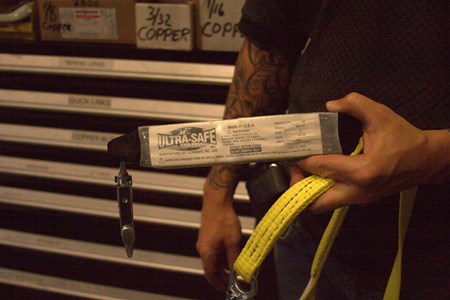 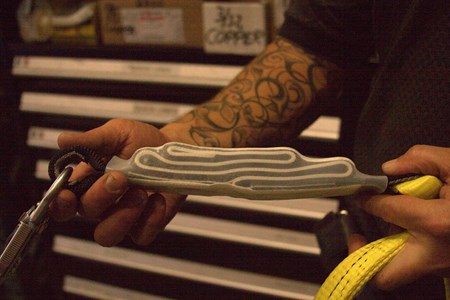