Pasta is a finicky food. Most people think of it in its fully cooked state—soft, succulent and durable enough to harmlessly toss against a wall to gauge its eat-readiness. However, the pasta manufacturing process reveals its true identity: a rigid, break-happy material demanding ultimate precision and care. Pasta Montana in Great Falls, MT, specializes in this delicate delicacy, from raw material to packaging; and with the help of Rice Lake, has undergone a modernization effort to better handle pasta at each step of their process.

When Claude Smith became plant manager of Pasta Montana in 2010, he immediately noticed areas that needed improvement. Bulk containers weighing between 500-1000 pounds were being manually filled and adjusted to reach specified targets. “It was a very time-consuming and inefficient process,” Claude explains. “We set the empty container on a floor scale, weighed it, and then scooped product in and out until we got the right weight. People were using their best guess to predict the overshoot or undershoot on the scale.”

Furthermore, operators were confined to an area near the weight display. “Someone always had to keep an eye on the readout,” Claude continues. “We spent a lot of time adjusting the weight and had to use two people on the job because of the inefficiencies.” Pasta Montana manufactures pasta 24 hours per day / 7 days per week, and at least one of those days was devoted to this bulk filling process. Claude had experience with automated process control at different facilities and called Logic Control Systems, a high-tech systems integrator, to incorporate a similar solution and help optimize efficiency at Pasta Montana. 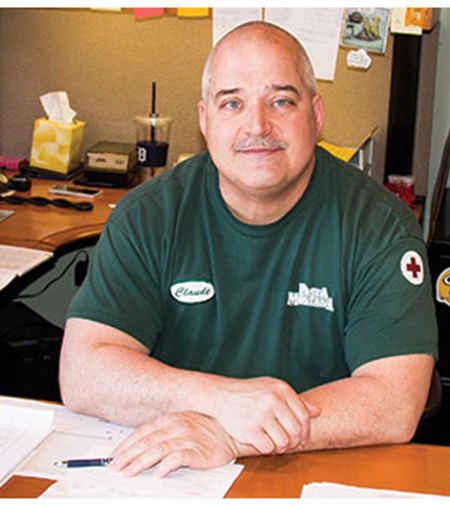 Making dry pasta is a continuous process. The raw material, semolina, is mixed and extruded through a set of dies to determine shape based on customer needs. After its shape is formed, the pasta mix enters a dryer for approximately four hours. It then runs through a cooler to avoid condensation. Once out of the cooler, the pasta travels through a few elevators and on to the next line, where a tote, bag or box is filled and packaged. This process runs on a loop, around the clock. “We needed the tote filling process to be continuous,” Claude explains.“If there’s a shutdown, it affects everything. Pasta dryers require a lot of humidity to dry the pasta. It seems counter-intuitive, but the humidity comes from the product. So if you’re not continuously putting fresh product in the dryer and taking dry product out, the process stops. It’s difficult to maintain good quality product because you’re eating away your humidity and not replenishing it in the form of product that’s been freshly extruded. If a line stops, we have product ready to exit the dryer and product ready to enter the dryer and each is now suspect in quality. In the past, this happened when we had issues filling totes, the operator fell behind, or a button wasn’t pressed at the right time.” 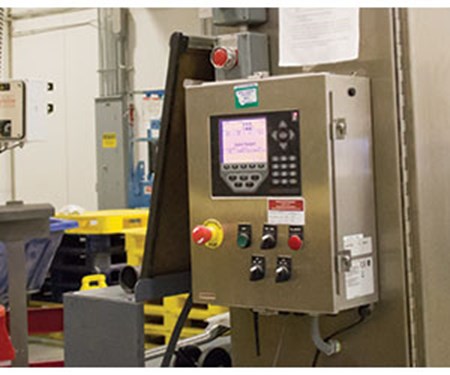 After a thorough review of the process, a 920i FlexWeigh System 101 was selected to control the bulk packaging process. “I recommended Rice Lake for their versatility,” explains Scott Cartwright, Business Development for Logic Control Systems. “I’ve always been a Rice Lake fan because the products are easy to implement and the scales are fantastic. I can always find a solution that fits my need.”

With 920i FlexWeigh 101s in place, line stoppages no longer occur. The proverbial bottleneck which once existed in packaging has now spun its way back to processing. Increased packaging capacity has created a ravenous demand for more product.

“I knew of Rice Lake by reputation,” Claude remembers, “but never had the chance to work with the products until this project. In the food industry, everything is very cut and dry. Either something works or it doesn’t; there aren’t very many shades of gray. The highest compliment I can give Rice Lake is that their stuff just works. I’m very happy with the results. One person can now run that packaging line without worrying about keeping an eye on the scale’s digital readout or scooping product in and out. They are free to allow the system to fill, build a few totes ahead of schedule, and come back when it’s done.” This was just the beginning.

The tote filling station ignited a fire of ideas for Claude, who blazed a trail for optimizing other manufacturing areas within the plant. A different production line focuses on special customers who require boxed pasta rather than bagged or bulk-tote pasta. This requirement always presented issues because Pasta Montana hadn’t yet developed a reliable solution to the packaging problem. “We were frantically trying to use a bench top scale,” Claude explains. “When the product came out of the dryer, we would rush it to the scale but couldn’t get it there without a good deal of breakage and damage.” The cumbersome boxing procedure wasn’t attacked earlier because customer requests only demanded the line to run one or two times per month. However, when a bucket elevator upgrade to the line became necessary, Claude took the opportunity to modernize the entire process.

Because of pasta’s fragile nature, it will crack if dropped and result in poor quality. Claude and Scott incorporated a custom made Italian spiral to achieve a slow, gentle pasta drop and avoid the all-too-common damage. Pasta rides down the giant auger and is softly placed in a box. Claude also wanted the pasta to be weighed as it exits the spiral, so Logic Control installed BenchMark bench scales to capture accurate weights and a 920i FlexWeigh System 102 which interfaces with a foot pedal to control the process. A small hopper was built with a gate valve at the bottom of the spiral, which is controlled by weight set-points. The system precisely calculates preact (product that is in mid-air when filling is stopped) and incorporates that into the target weight, reducing product waste due to overfills. 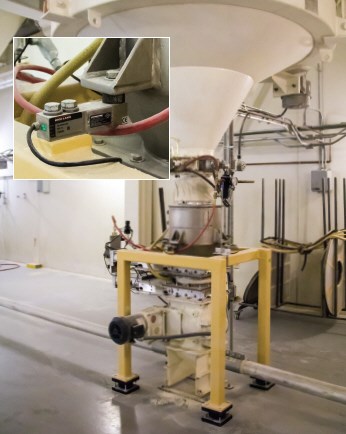 The new system’s results are impressive. “We used to have five people for that line,” Claude remembers. “We’ve only run a few times, but we don’t spill product anymore and will probably get down to two or three people. We used to spill a lot of product trying to run 4,000 pounds of pasta per hour into 10-pound boxes. There just wasn’t a good way to divert pasta into a small box with the other system. We tried deflectors, baffles, slides, chutes and conveyors, but nothing worked—until now. We used to dread when those jobs would come in because it was so tedious, but now we actually want more business for that system because we want to run it. I get nothing but compliments from the operators.”

A third area of the facility also needed modernization: the semolina intake silos. This area receives and stores raw semolina, dispatching it into the mixing lines as needed. However, there was no way to measure how much semolina was being used, making it extremely difficult to track efficiency and material usage. Logic Control Systems installed RL30000 load cells under each silo and interfaced them to SCT-20 indicator transmitter units to send the weight data to Pasta Montana’s management system. Management now has access to detailed reports on total semolina pulled from their supplier and usage for each production run and line.

Efforts throughout the plant have drastically improved the bottom line. At their core, scales facilitate one essential function: measurement. While that can encompass many things, from product weight to raw material usage and operator efficiency, it all adds up to the big picture of success. Pasta Montana discovered their secret ingredients to success with modernization and Rice Lake scales, and are now producing the most delicious dish of all—profits. 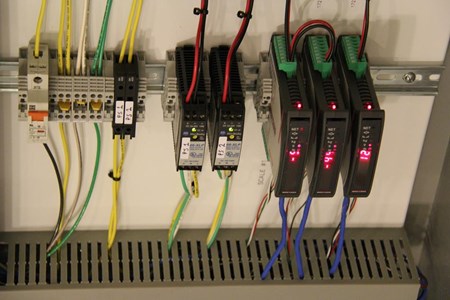 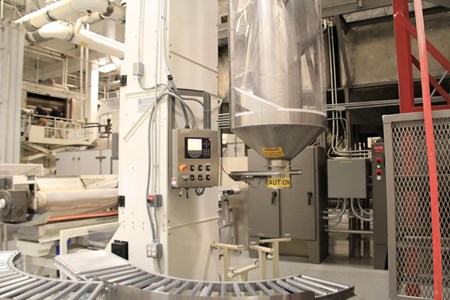 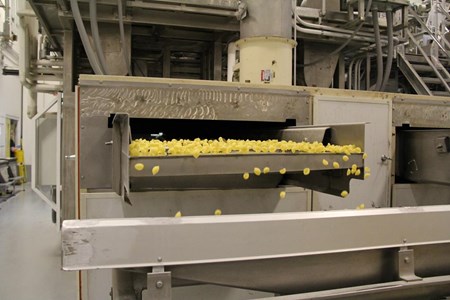 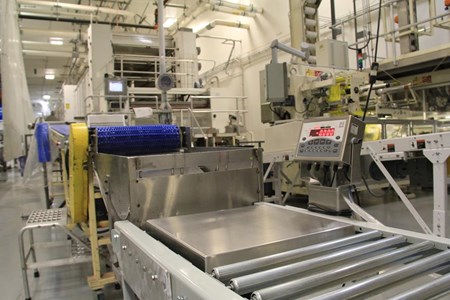 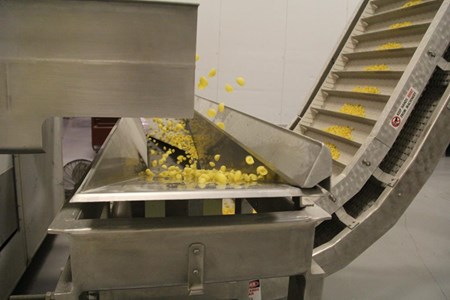 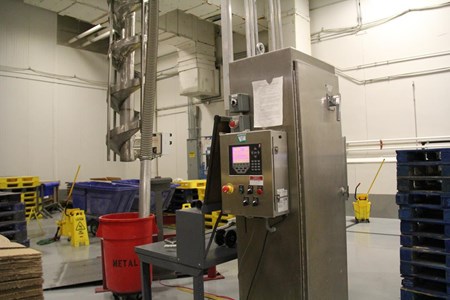 920i FlexWeigh Filler/Batcher Systems combine the power and versatility of the 920i interface with the simplicity and strength of the FlexWeigh control panel. The Summit 3000 floor scale is an economical choice for a broad range of industrial weighing tasks, with a durable low-profile deck that fits well into many material handling environments.