Job Shadowing the 920i

A 920i-controlled portable filling station takes the guessing and grunt work out of filling containers with waterbased polyurethane.

Dan’s filling station can fill a single 240-gallon container or four 57-gallon drums or five 35-gallon drums at one time. Dan says, “This used to be a two-man job. Now one operator tells the 920i the number and size of the drums and target weight and presses start. The 920i automatically sequences through the drums, filling them consistently and accurately.”

Bret Chansky, assistant plant manager, adds, “Before this system, one man held a hose down in a drum until it was full, shut off the product flow and trimmed the drum manually, while another person closed and sealed the lids. The time it takes to fill the drums with the new system is about the same. However, the new system is a much more efficient use of time. And since the 920i is a machine dedicated to weight-based filling, cutoff accuracy has improved because the system fills each drum to within one graduation of target.”

The system also frees the single operator to do other steps in the process. While the system is filling drums on the scale, the operator can stage the next pallet of drums to be filled and bring filled drums to the storage area.

The filling nozzle withdraws from the drum by weight set points, thereby reducing foaming of the product in the drum. The set point is a predetermined amount of weight. For example, each time 50 pounds is added to the weight, the 920i turns on the air cylinder for a predetermined time, approximately a half second, causing the fill nozzle to rise.

The polyurethane is easily cleaned from the system by flushing with water at the end of the day. The build-up of material on the outside of the nozzle piping is also removed with water. Dan designed the system using commercially available plumbing tubing, so Union Specialties has a trouble-free system with piping that can be replaced quickly and reasonably.

“I specify the Rice Lake 920i because I want the flexibility further down the line. As this application grows, Union Specialties will probably want to add more fill stations, more steps and more analysis.” Dan admits, “And Rice Lake has Marvin Stodola. I send him the sequence I want, Rice Lake writes the program, I sell the 920i system. What could be better?” According to Marvin, “Dan and I have worked on many projects over the years. He works with the end-user on developing the initial project specifications. This includes the sequence of operation, digital I/O map, database structure and weigh ticket design. I then clarify the specifications based on my experience on past projects and get Dan pricing on the hardware and software.

“Most projects require some modification once they have been installed and the enduser has had a chance to play with the system. Changes usually include modifying the weigh ticket or adjusting the transaction database table. Sometimes additional functionality is added once the end-user finds out what the 920i can really do. Sometimes the actual operator figures out ways the 920i can make his job easier.”

All in a day’s work. 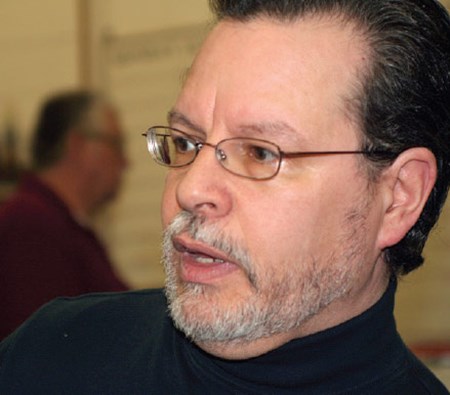 This was a two-man job. Now, one operator tells the 920i the number and size of the drums and target weight and presses start." --Dan Biron, Global Weighing Solutions LLC