iQUBE² offers the same load cell diagnostics as a truck scale using a digital load cell, but for a fraction of the cost. This advanced junction box runs diagnostics for failed cells, weighing errors and system health.

If a load cell does not return to zero, it may be due to scale binding or damage to the load cell. Unfortunately, just one defective load cell can uproot the entire system. Rice Lake’s iQUBE² junction box measures the signal of each individual load cell, enabling it to detect problems and pinpoint the area before it becomes a concern.

When a load cell tolerance is exceeded and a scale is nonlinear, typically the operator won’t notice until an inventory shortage has already occurred. However, with iQUBE², linearity is verified by monitoring load cell tolerances, meaning inventory will be full and accurate.

Instability, or noise, is a common scale system problem triggered by deteriorating resistance to ground. Noise is often confused with environmental factors such as wind or vibration. Just one faulty load cell can cause system instability, which is why iQUBE² monitors individual load cells as well as overall system health.

With cell emulation, iQUBE² is capable of calculating what the weight of a failed load cell should be based on comparisons to functioning load cells. iQUBE² ensures your scale can continue weighing temporarily even after a load cell failure. This can mean the difference between continuing an efficient process and having to shut down the plant early.

Rice Lake’s iQUBE² runs the same sophisticated diagnostics as a truck scale using a digital load cell. Because analog-to-digital conversion occurs at the junction box instead of the load cell, it is less likely to be damaged by circuitry. Combined with routine testing for zero return, linearity, noise and drift, this makes iQUBE² a superior junction box. 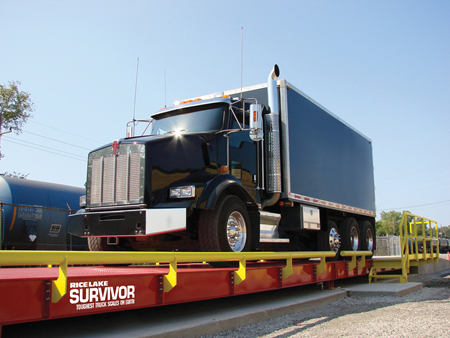