A hidden and remote gem located in the western Pacific, Yap State is a tropical island encapsulated in tradition. Part of the Federated States of Micronesia, visiting Yap is like going back in time to an ancient Pacific island bursting with flavor and village life. Measuring less than 40 square miles, Yap is relatively small in size, but exceedingly rich in history, traditions and culture. Within this secluded island, modern healthcare and fitness technology from Rice Lake Weighing Systems is helping to overcome the growing obesity rate among Yapese people. To fully understand its need and value, one must first understand Yap’s history.

With ancient customs playing a central role in Yapese lifestyle, the people are grounded to their history, their traditions and their land. Yap is home to just over 7,000 people and includes four main highland islands—Yap proper or Wa’ab, Tamil/Gagil, Maap and Rumung—and is surrounded by a series of outer atolls. With its lush vegetation, white-sand beaches and intricate mangroves, Yap begs for adventure and exploration. Hesitantly, the island is beginning to bring tourism to their front step. In town, visitors to the island can enjoy comfortable amenities and dining, adventure excursions and shopping, but farther from town, closer to the rolling hills of vibrant green, the pavement ends and traditional village life continues much like it has for centuries.

Yap’s rich history dates as far back as 200 A.D. Villages governed the islands with a strong caste system. Those living in the high islands typically were included in higher castes than those in the surrounding atolls; although village statuses often fluctuated due to conflicts and battles with neighbors. Today, Yapese society is still based on their complex caste system, but status movement has stalled post-colonialization.

Since its initial sighting in the 16th century by Spanish explorers, Yap has been colonized by many nations. The longest period of colonialization, from the 17th century until the late 19th century, resulted from those initial Spanish explorers. After the Spanish colonization, Yap was colonized by Germany prior to World War I, and later by Japan until the end of World War II. At that time, the United States became the protector of it and the Caroline Islands under the United Nations “Trust Territory of the Pacific Islands” mandate. In 1986, Yap as well as the Pacific islands of Truk, Pohnpei and Kosrae created the independent nation of the Federated States of Micronesia. Despite the many different cultural influences imposed onto local villagers by colonizing nations, Yap has retained much of its traditional culture, including the use of stone money. 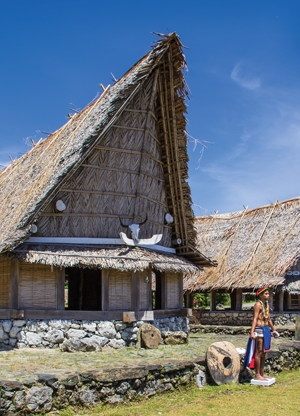 In the tourism industry, Yap is most famous for its stone money, locally known as raay. Dating as far back as human history on the island, Yapese locals use their stone money for trade, economic status and as a denotation of their caste. But to Yapese culture, the stone money signifies much more than currency; each piece of stone is personal. It is a story, memory and reminder—a symbol that reflects the hazardous journey to the Palau islands to quarry the stone, to bring it home in handmade canoes and to protect it. The story of how the stone money was claimed or won from other tribes—a frequent part of each piece of stone’s story—is meticulously remembered and tied to the stone’s history.

To visitors, the islands of Yap appear to be frozen in time. In villages, men still dress in loin cloths and women wear grass skirts and intricate jewelry and adornments. For traditional festivals and celebrations, men and women move in synchronization to local dances that tell the islands’ history and native Yapese songs are heard throughout the islands. Yap is bountiful with traditional values, culture and daily life. But with globalization, many modernizations have affected the islands in its post-colonial state; compelling the ancient Yapese culture to mix with modern influences.

The islands’ growing tourism boosts Yap’s economy, including access to modern education, healthcare and trade goods. From government officials and police officers to students, business owners and nurses, locals are adopting new modernized roles and new ways of life in their communities. Local grocery stores and markets in town provide Yapese people and visitors alike with provisions such as dry cereal, packaged snacks, sugar, canned meats, fruits, vegetables and milk, as well as soft drinks and beer. Because of these conveniences along with post-colonial and western diet influences, many Yapese people are exposed to foods that are unfamiliar to their ancestral diets of fresh fruits, vegetables, seafood and local meat.

Rice Lake’s Competitor Series body composition analyzer (BCA) is designed for health and fitness professionals who want a more comprehensive picture of health for their patients and clients. The BCA incorporates the most advanced bio-electrical impedance analysis technology to provide accurate and dependable results. The BCA provides detailed body composition information, is easy to use, can be moved to different locations and immediately prints a detailed, easy-to-read analysis with a built-in ticket printer.

For Naty Malgarsoh, public health nurse supervisor at Wa’ab Community Health Center, the BCA provides an exact analysis of a patient’s composition as well as data needed to define a patient’s overall health to better create a personalized health regimen. The BCA on Yap is a valuable tool for screening patients for obesity and other weight concerns. Just weeks after receiving the BCA, two Pacific typhoons brought immense storms to Yap. But health center staff coordinated Yap’s yearly Women’s Health Week in spite of the dangerous weather conditions. Their devotion to bringing health education and resources to the island communities could not be shaken. Used to screen 240 Yapese women for the Women’s Health Week event, the BCA is proving to be invaluable—and durable. “The Women’s Health Week came up [and] a total of 240 women used the BCA, plus 20 of the hospital staff have used it so far,” explains Malgarsoh of the BCA’s use on Yap.

At the Women’s Health Week event, Yapese women were given a health screening that included a blood pressure reading, routine blood draws, breast examination, oral examination and body composition analysis using the BCA. “The medical staff explains what each procedure is for, and the results and counseling are given when the screening is over,” explains Malgarsoh. The BCA provides data, including body mass index, lean body mass, fat mass, waist-to-hip ratio and more, to help the staff counsel the women. The BCA can also compare results to normal ranges for a woman of their height and age. 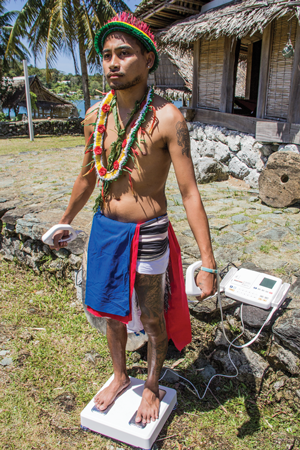 “If [a patient] fell outside the normal range, they were counseled on methods to lose weight and exercise more,” says Malgarsoh. Although still new to the Yap Health Services department, the BCA has already received a warm reception. “The medical staff appreciates the fact that they no longer have to work mathematical formulas involving height and weight; it is done automatically and saves much time and effort,” says Malgarsoh of the staff’s response to the BCA.

With the success of its use at Yap’s Women’s Health Week, plans are already in process to incorporate the BCA at future health screening events as well as regular use at the hospital. “The Men’s Health Week is coming up next, and the plan is to use the BCA [then] also,” says Malgarsoh, “[and] a protocol is currently underway for its use on a regular basis at the Yap hospital.” With the BCA’s assistance, the health center is actively helping the Yapese people choose healthier lifestyles, ensuring that this rich and beautiful island is able to continue to flourish.

The mix of old and new is welcoming and superbly unique to Yap. From ceremonial bamboo dances and stone money, to education and healthcare, Yap is two worlds in one. In the morning, a Yapese woman can go to work at the health center, providing modern care with innovative equipment like the Competitor Series BCA, and at night, return to her village to practice the traditional Yapese dance Churu and make her hibiscus skirt for an upcoming festival. Embodying immense pride for their culture and history, with a yearning for innovation and modern advances, the Yapese people weave two worlds’ threads into one intricate piece of cultural art that is truly unique to the world.