For most people, the same images come to mind when they think of California — beautiful beaches, celebrities, and famous landmarks such as the Golden Gate Bridge. We typically extrapolate the images of Los Angeles and San Francisco to the entire state; however, just east of these two California anomalies, the beaches fade to farmland, the celebrities transition to field workers and the metropolis becomes a traditional small town.

Although technically in the same state as its more publicized counterparts, the San Joaquin Valley looks more like the Midwest than stereotypical California. Stretching more than 400 miles, it lies between the Tehachapi Mountains and Redding, CA. The valley has been called the richest agricultural valley in the world, accounting for 25 percent of the nation’s agricultural production. Grapes, raisins, wine, cotton, fruit, vegetables and nuts thrive in this unique area. Cattle and sheep ranches also contribute significantly to the valley’s economy. Among all these, one crop has exploded in production over the past 30 years to become California’s #1 export— the almond.

As the only state commercially producing almonds, and with only one percent of the nation’s farmland, one would not expect the numbers to be all that impressive. In the 1970s, growers worried they could not sell a 100-million-pound annual crop. That might seem like a lot, but it is peanuts compared to today’s 1.6-billion-pound almond crop. That is sixteen times more than 30 years ago, and each delicious little nut has to be weighed.

Why has the industry experienced such a boom in California over the past few decades? The old real estate adage rings true: Location, location, location. The state’s unique climate of mild winters and dry, hot summers make ideal conditions for finicky almond trees. With the huge industry growth, facilities that grade, sort, weigh and package almonds have had their buildings practically overflowing.

California is the only U.S. state commercially producing almonds. It provides 80 percent of the world's supply.

With over 20 years of California scale experience, Roger Wolfenbarger has been right in the middle of the almond explosion. He founded ABM Scale Company in 1993 and has developed a system that helps companies keep up with the almond demand. Roger has implemented a turnkey system at Famoso Nut Company, located in the center of the San Joaquin Valley, for sorting, filling, and tracking almonds.As with most foods, the greater the size and the fewer the defects, the higher the price—the same is true with almonds. So almonds are cleaned, hulled and shelled, and sorted by similar size and quality. Samples are graded; based on that grade, the almonds might go through additional electronics to remove imperfections and attain a higher grade.

At Famoso, where boxes of almonds are so prolific it resembles the last scene of Indiana Jones and the Raiders of the Lost Ark, there’s a lot of demand on their equipment.“The system is only as good as its weakest component,” says Roger Wolfenbarger. “That’s why we take the high road on everything we install and use Rice Lake’s RoughDeck® wherever possible.” At Famoso, rows of RoughDecks lie beneath almond spouts in a batch-filling system. “With the quantity of almonds going through here,” Roger explains, “there’s really no other scale I would trust in this environment.” Traceability is also a big part of ABM’s Famoso system. “You can’t just have a bin out there and not know where it came from and who it belongs to,” Roger explains. That’s why he worked with ABM’s software designer, Ryan Evans, to develop the REACTS system, which automates weight certificates, traceability, and the reporting process. By a simple scan of a barcode, REACTS can determine which almonds came from which grower, and even which specific lot. That’s an invaluable service if there’s a problem with the almonds.The demand for almonds remains undeniably high. They are an immensely popular ingredient because they add a perceived level of class to almost any food. With Rice Lake’s RoughDecks and the REACTS system, Famoso is able to maintain a certain high-tech sophistication of its own. 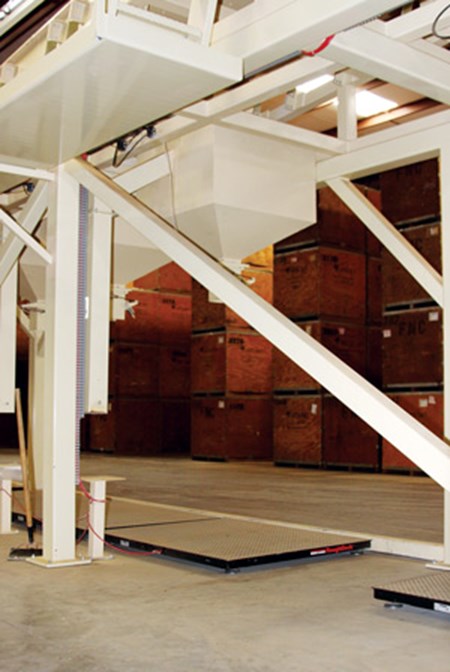 Rows of RoughDecks lie beneath almond spouts in a batch-filling system.