The 720i’s combination of power and ease-of-use makes it an ideal fit for complicated batching systems across the food, chemical, animal feed and construction industries.

In the heart of Thailand, a colored-cement and grout manufacturer needs the fastest and most accurate customized mixing system in the world. Where other mixers take 20 minutes or more they need a system that takes under five. In an 8,000-pound batch they need five 30-gram samples to be within Cv. 5%. They also need the system to be automated yet foolproof; sophisticated yet user-friendly; fast, accurate, and repeatable.

Meanwhile, in Pennsylvania, a sales representative is starting a follow-up call to a recently installed system. As he waits in the lobby toward the exit he is stopped by a tap on his shoulder. “Hey, are you the guys who did the mixer?” a curious stranger politely asks. “I saw the logo on your shirt—A & J Mixing. We might have a project for you.” They exchange pleasantries, business cards, and a handshake.

Two weeks later now back in his Oakville, Ontario, Canada home office, Lyndon’s phone rings. It is the gentleman from Pennsylvania; he has a project in Thailand and he wants to talk details. “He was asking me, ‘Can this be done’ and ‘Can that be done?’” Lyndon recalls. “When I described some of our previous projects and what A & J Mixing is able to do, we had a match.” Little did he know the system would develop into an incredibly complicated, yet surprisingly user-friendly, cutting-edge mixing solution.

A & J Mixing is a small Canadian company specializing in high performance mixing systems. In 1995, the company’s founder, Bliss Flower (who regularly receives calls requesting floral bouquets) invented a unique rotor design. Using industry and engineering know-how, Bliss developed a single-rotor, low-intensity mixing machine that achieves the fastest and most accurate batches in the industry. In the years since its invention, the mixing system has been used in multiple applications. The advance of technology in the past 15 years meshed well with Bliss’ revolutionary design.

Today across the food, chemical, animal feed, and construction industries, A & J Mixing’s patented rotor provides a predictable, repeatable and reliable solution. With batch times at one minute for straight powders and three to five minutes for colors, A & J had the perfect mix for the Thailand job. The client is in home-construction products. Another customer wanted a system that fills multiple-sized pails with multiple weights of grout and cement per pail.

A perfect mix of speed and quality, this Phlauer dual-rotor custom mixer can complete dry ingredients in 30 seconds and a total cycle in five minutes. Mixing faster than segregation can occur and controlling the void size assures a top-quality outcome.

Jon Prenger, a veteran designer with A & J Mixing, suggested Rice Lake’s 720i indicator to handle the individual scales beneath the mixing system and a 920i indicator interfaced with a PLC & PC to control the weigh hoppers and load-cell-based mixer. But it doesn’t end there; where product is discharged sit two 720i’s that monitor a pail-filling system resting on a bench scale. Since the product flows so quickly, its rate of flow is difficult to control. This is where Bliss’ auger design integrates into the system to achieve unmatched results. Calculations for flow are based on the attributes of the material being used which is stored in Rice Lake’s ProAction PCEE database. From there an automated roller conveyor sends filled pails to a pail closer.

“This was a brand new installation,” Jon remembers. “In the past, systems like this were hand-filled or not controlled in conjunction with a PLC and programmed indicator. They would just have an indicator, fill, stop, and it would be a manual top-off to get to weight. Today, with our system there’s none of that going on and the element of human error is minimized as much as possible. The operator just puts the pail in place and hits START. It fills and is taken away.”

The 720i triggers relays in a separate control panel which then goes back to the main control panel where the VFD is located. It’s not actually controlled by the PLC. Because the PLC is a separate system, they can keep mixing or run a parallel system at the same time. Everything fills into the mixer, which is also on load cells for checkweighing so the PLC knows when the material has actually been added to the mixer. Any hand-adds (small requirements of 10 pounds in a 5,400-pound batch) can be seen by the indicator. Through touchscreen interaction, the operator verifies the hand-add has been done. Floor scales are used alongside the mixer. The operator puts a container on one of these floor scales and the PLC will see the extra 10 pounds. Once the operator confirms it has been added, the indicator commits the weight and the mix begins. When everything is mixed, it is discharged into the hopper above the small screws A & J Mixing designed. From there everything is mixed together and pails are filled as required based on weight. However, some materials flow so quickly that aeration is impossible to avoid. This aeration results in the system not necessarily seeing the exact flow rate all the time but the scale’s high accuracy compensates for this.

“We also had to look at how many different recipes and weights that we had to incorporate into this,” Jon continues. “We used ProAction PCEE and DBE to create our own custom input system where the operator looks at the work order to see which product is being made that day. The operator will input that product code in the 720i where a confirmation system in the database double-checks the proper code has been input. After that, it’s semiautomatic. When the operator presses START, the batching program has preset points set so it automatically fills when setpoint relays are reached, which is controlled by the digital I/O of the 720i and slows down the screw to achieve high-end accuracy. When we do a 60-pound pail, we can be no more than plus or minus half a pound, and can never be under weight. We were filling six-gallon pails in approximately thirty seconds! The benefit of the 720i is flexibility and reliability. The entire system is controlled with Rice Lake equipment. The customer has never had a problem with it and is extremely happy.” 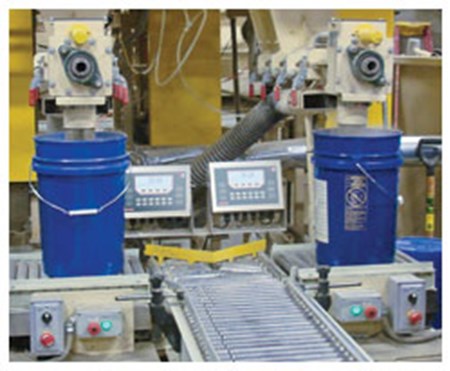 The 720i’s combination of power and ease-of-use makes it a perfect fit for complicated batching systems.

Product coming off this system is shipped internationally, and there are a lot of different customers with everything from small batch orders to large volume orders. Because A & J Mixing designs a system like this from the floor up to fit all the equipment—bench scales and tables to mount indicators, switches, and junction boxes—they have a full grasp of the facility and its needs. To accommodate the variety of products, A & J engineered slide-out troughs that are completely removable for easy cleaning and accessibility. So when an order comes in for a different-colored grout, brushing out or vacuuming residual material from a previous batch is a breeze.

Often with semi-automated filling systems, the customer’s worst fear is an inattentive operator pressing START with some weight on the scale, which means the system thinks a bucket is actually in place. It wouldn’t take long for 1,000 pounds of cement to be on the ground. A & J Mixing thought of this as well and set display prompts such as “add your empty pail,” which acts as a checkweigh setpoint. Since the weight of the pail is known, the operator is forced to respond to this prompt before the batch can continue. A similar prompt appears when the pail is full, and the operator has to confirm it has been removed before continuing.

Surely, a system this complex must require extensive programming experience. “I was familiar with programming for the 920i,” Jon explains, “but PCEE and DBE were new to me. It was nice the PCEE steps you through the programming process to give the customer total flexibility for their database. We even have it set up now so the plant manager can connect and upload any changes to a recipe with only five minutes of downtime. The manager just plugs a laptop in serially, downloads the information, and the operator can get back to work.

“The nice thing about the 720i,” Jon continues, “is that it has the flexibility with the digital I/O to control what’s happening, and we can set it up to control the fast and slow feeds, turn mixers on and off, and give feedback to confirm ‘yes, we’re running’ or ‘yes, power is on.’ People in the office know the equipment status at any given time. The way we set up the fields in the database, it displays back on the screen so operators can see when entering a certain number, it says they’re doing a certain size pail and a certain target weight, and they can confirm. The work order shows the customer name, pail size, and weight. So even if someone types it in incorrectly on the database field, the proper values will be on the screen, and the operator can visually determine if something doesn’t match up.” 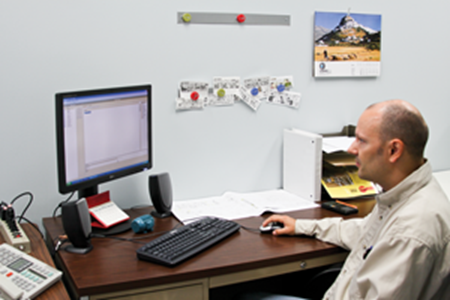 A & J Mixing’s attentiveness to customer needs is reciprocated in its relationship with Rice Lake. “Working with Rice Lake is great,” Jon reports. “Any time we have customer questions or need something shipped overnight they always come through. Their support is unmatched. Our customers don’t necessarily have a scale company in place. This is something new for them; they’re used to just mixing and bagging off a system and haven’t used scale controllers and technology to control and run the whole system, so they don’t have those contacts. Rice Lake is able to provide local distributors or scale companies. My customer now has a local contact so if there’s anything physically wrong onsite someone can show up right away. I can help them only so much from the phone, so it’s nice to have someone local. We provide a lot of support, and it’s important that everything—from indicators and scale bases and load cells to the cabling—holds up.”

A & J Mixing is pushing the envelope in their niche industry. The first pail-filling system they completed was in 2005 and had only one target weight and one product/bucket size. Subsequent systems go leaps and bounds beyond that. The framework of one system that works this well allows A & J to use it as a template for similar solutions in different industries. The flexibility and reliability of Rice Lake equipment is there every step of the way, and support is only a phone call away. Rice Lake and A & J Mixing work well together to provide the perfect mix. ProAction Software for the 720i™​

ProAction can bring up prompts, store and retrieve product and job information, compare and accumulate weight, read inputs, control outputs, start tasks depending on time of day, and more.