The Green Bay Packers are one of the most successful teams in NFL history. Dating back to the team’s origin in 1919, the Packers’ long list of achievements can be attributed to taking a different approach than the opposition. They zag where other teams zig. The Packers are based in a small city rather than a large metropolis, owned by fans instead of a wealthy individual and are a nonprofit organization—the only one of its kind in professional sports. These unique qualities, along with strong performance on the field, have endeared the team to the community. Following this trend, rather than choosing the same massive company almost every other team uses to manage their Pro Shop’s online orders, the Packers employ local residents and use Rice Lake’s iDimension parcel dimensioners to ensure cost-effective shipping. 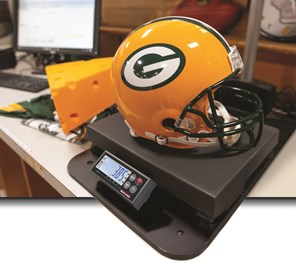 The Packers boast the NFL’s largest Pro Shop at 21,500 square feet, a far cry from the original 17-foot by 17-foot space first opened in 1989. The store offers everything from jerseys and hats to cheeseheads, tailgating accessories, collectables and almost everything imaginable. For fans who cannot physically visit Lambeau Field, the online Pro Shop serves as a virtual shopping smorgasbord of over 15,000 items, accompanied by one of the most active shipping departments in the league.

“We stay pretty busy all year,” said Tim Schroeder, manager of the Packers’ retail distribution center, “but it really ramps up in April through September and the holiday season. Especially when the team is winning” as he gives a wink. “We ship significantly more orders in a playoff season.” Good thing the Packers have been winning a lot over the past several decades, as it keeps the Packers’ packers busy shipping orders.

As each order is picked from the warehouse, it is packed in a poly bag or cardboard box, depending on the material and size of items in the order. “The goal is to ship items safely in as small of a package as possible to save on shipping costs,” Schroeder explains. “We try to utilize our UPS SurePost contract whenever possible because it offers additional discounts.” UPS SurePost is the economy method of using the US Mail for packages not exceeding 108 inches in total dimensions. However, optimizing these shipments is easier said than done, which is where Rice Lake’s iDimension steps in as MVP of the process.

The shipping department was using eight pre-set cardboard box sizes, each falling within UPS SurePost regulations. While having these standard box offerings enabled them to guarantee the shipment could mail via SurePost, each Packers’ packer packs boxes slightly differently, which resulted in significant unused or “dead” space within each box and inefficient shipments. Furthermore, UPS notified them they were going to begin a new charging process based on dimensional weights.

The Packers needed a new game plan. They switched from purchasing individually sized boxes to a corrugate machine that cuts boxes to the exact size needed for their products. They also implemented iDimension dimensioners and BenchPro bench scales to verify exact dimensions and weights since they no longer utilized standard box sizes. Because UPS’ new charging process included significant chargebacks, Rice Lake’s total dimensioning and weighing solution was able to save the Packers a significant amount of money each week.

For example, if a box was shipped with an actual weight of four pounds but had a dimensional weight of eight pounds, UPS would calculate the cost difference at each instance, summarize the weekly total and divide it by the number of adjustments. This provided an average adjustment cost which, if it exceeded $2, would be charged back to the Packers at full price. 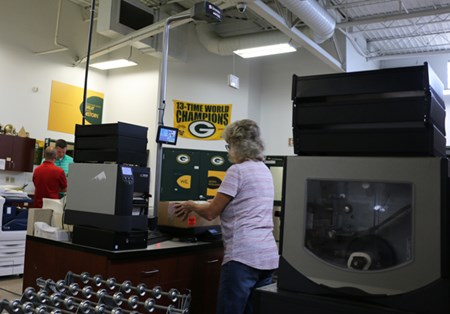 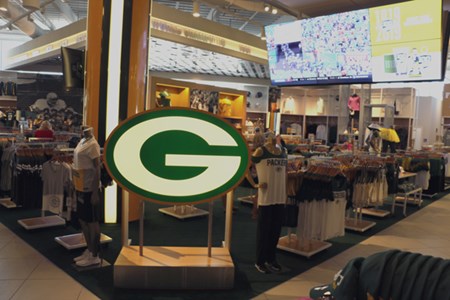 The Packers Pro Shop offers over 15,000 items, accompanied by one of the most active shipping departments in the NFL. 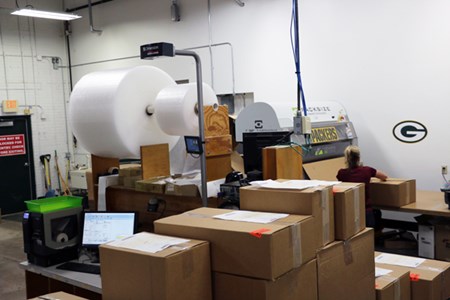 The Packers added a second iDimension dimensioner with BenchPro bench scale to capture measurements and weight and, through a PC interface, automatically select the best value shipping method and print a label.

“It could have added up to thousands of dollars per week if we didn’t stay under the $2 adjustment average,” Schroeder estimates. “With Rice Lake’s iDimension, we now know the exact measurements of each custom box and can avoid these chargebacks. iDimension with the BenchPro scales reaffirms to us that ‘Yes, this one can go Surepost or this one is a massive box such as a golf bag, which might be three pounds but have an adjustment of $8. Now, we have the dimensions and we won’t have any adjustment on that. Weekly, I go through to see how many corrections we have compared to the total dollar amount, and we are staying well below the $2 average adjustment threshold.”

The iDimension dimensioner worked so well they added a second installation to further streamline shipping. With the current process, there is the possibility for manual errors which could bump a shipment from UPS SurePost to UPS Ground. When this occurs, the contract’s discount is lost and there is an additional fee. As the department moves to new computer software, the second iDimension dimensioner with BenchPro bench scale will capture measurements and weight and, through a PC interface, automatically select the best value shipping method and print a label. All in a matter of seconds with NTEP verified measurements.

Such an efficient system is champion of the shipping world and it seems fitting the NFL’s most prolific championship-winning team would also achieve greatness in their retail distribution center. It would have been easier to follow the path of almost every other team by hiring an outside company to manage e-commerce but that’s not the Packers way.

“When you spend your money at the Packers Pro Shop, whether physically at Lambeau Field or through our website, “Schroeder concludes, “it truly is going to us. With the Packers, it supports the team and entire community of Green Bay.” As a like-minded company deeply invested in the surrounding community, Rice Lake is the perfect partner for measuring success. 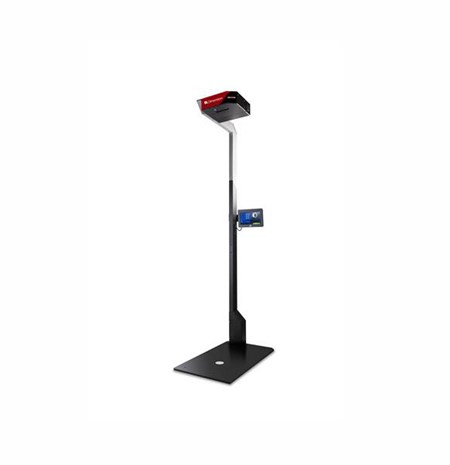 The iDimension Plus static dimensioning system automatically measures parcels and irregular packages in less than 0.2 seconds. A small footprint allows for easy integration into current workstations or retail environments. 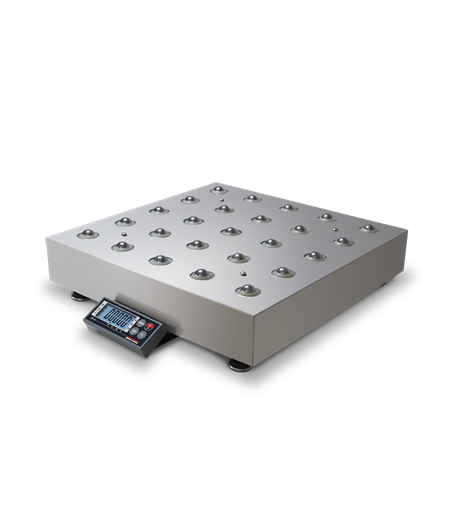