Last December, the Boone & Crockett Club published a photo on their Trophy Watch web page of a breeder buck said to be worth $1 million.  In a cyber-second, the photo spread through hunting sites and blogs, and all were amazed at the antlers scientific breeding and nutrition could produce—but a deer hunter is unlikely to see a buck like that in the wild.

In the natural world, gene pools of whitetail deer from far and wide have intermixed with indigenous populations resulting in tremendous genetic variation. Consequently, there is a wide variety of antlers from spike bucks and typicals, to the monstrous non-typical bucks of hunters’ dreams.

That is the dream Kevin and Tracy Calmes are making a reality at Antler Valley Whitetail Ranch outside Kaukauna, Wisconsin. The husband-and-wife team started raising deer in 1999. They are creating a herd of super deer, selecting whitetail bloodlines they are hoping will create bucks with trophy antlers.

Kevin explains, “What we can do here, that you can’t do in the wild, is breed a mother that is throwing a big typical [rack] to a buck who has a heavy, massive rack. When a doe comes into heat in the wild, she is usually surrounded by four or five bucks. She needs to choose the best buck. While the biggest buck is busy fighting off other bucks, another buck will come in and breed her. So it’s very rare that you get a good genetic line in the wild.”

The Antler Valley Whitetail Ranch is a trophy in itself. With the help of the Straight Line Fencing Company, they designed and built an amazing fencing system. There are 105 gates throughout, plus two miles of exterior fencing. The maze of alleyways, grassy paddocks, and pasture is phenomenally efficient and safe with double gates designed to turn alleyways into sorting and holding pens. Deer are calmly funneled through alleyways into the indoor handling facility. There are no 90-degree corners where deer could feel trapped. The walls are lined with smooth sheeting. At the end, the deer enter a squeeze chute where Kevin, veterinarians, and artificial-insemination technicians can treat each deer with minimal distress to the animal.

The deer are gently handled from the moment they are pulled from the doe to be bottle-fed. Kevin says that even though this is a business, it is also very much like raising pets. A lot of love and compassion go into raising these beautiful animals. Kevin and Tracy love their work. “They become a part of your family. Bottle-feeding is a lot of work, but it’s worth all of the effort because we enjoy the benefits that come from it. I don’t want to sell a doe that has an exceptional pedigree, and therefore is high in value, only to have it hit the fence because it is afraid of people. We love that we can open a gate and let them walk right out. They’re not bouncing off the fence, which is good, because they can easily break their neck. Their health and well-being is our main concern.” 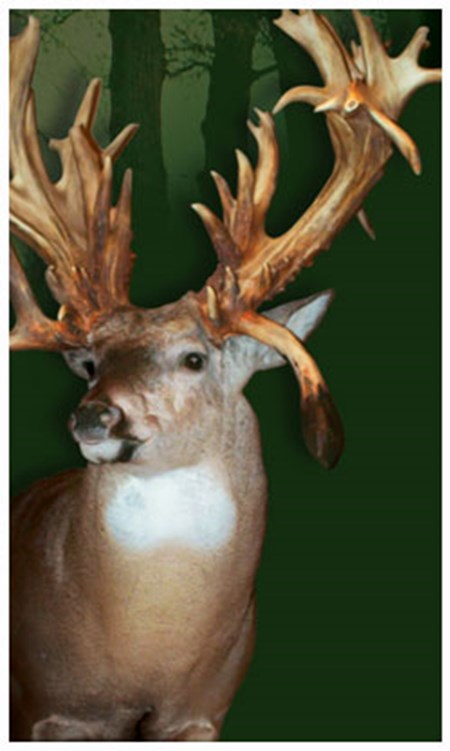 These antlers are resin replicas cast from the four-year shed of a breeder buck Kevin raised and sold. The owner keeps the original antlers.

The complex includes a feed building where water in the stainless steel kitchen is thermostatically controlled for mixing formula. Kevin knows genetics and nutrition, nature and nurture, go hand-in-hand. “Antler development is extremely important. Therefore, the nutrition that the deer takes in during the growth season is a main concern for us.”

Kevin says he can only get out of each deer what their potential is, “By giving the correct balanced nutrition, along with bottle-feeding, we are well on our way to achieving our goals.”

Wild whitetail deer forage a buffet of food varieties: acorns, fruit, legumes, shoots, leaves, flowers, cacti, mushrooms, cultivated crops such as corn, beans, and hay, and even red sumac that is poisonous to humans. They have been known to opportunistically feed on field mice, nesting songbirds, and birds trapped in mist nets. The deer on the Antler Valley Whitetail Ranch graze on a mixture of chicory, clover, and alfalfa, with a swath of timothy down the middle of the pens.

Kevin says wild deer have a hard search for food in the winter. “During a frost, deer will dig down to get to vegetation, but they might burn more calories than they’re getting so their metabolism changes. That doesn’t happen with these deer because they always have food. Although right now, since it’s breeding season, the buck has stopped eating. When they have breeding on their mind they seldom eat.”

Beyond where the feed is mixed, an unmarked door opens into Kevin’s office. Magnificent trophy mounts dominate the walls, and Kevin tells a great story about every one. Two of the most impressive mounts, with massive antlers, are actually replicas of the sheds of foundation bucks he uses for artificial insemination.

“This four-year-old breeder buck (shown on this page) was born on our farm and has since been sold. The actual antlers stay with his new owner.” Kevin explains that the replica antlers are cast from the actual antlers and mounted on a form. The form is covered with the cape of another deer that may have been shot and the hunter didn’t want the cape, or one that may have died on a breeding farm. “You can’t get a cape that is big enough in the wild. The base of these antlers is much bigger than [the antler opening] on a wild cape.”

There are 12 fenced grassy paddocks outside. As soon as Kevin opens the double steel gates, the fawns come trotting, sniffing, and are soon sucking on shirtsleeves and coattails.

“We pull the females away from the does after two days, so they still get the colostrum.” Colostrum is the milk produced just prior to giving birth that contains antibodies, as well as being lower in fat and higher in protein than milk produced later on. Newborn fawns have small digestive systems, and colostrum delivers nutrients in a concentrated low-volume form. “Then we bottle-feed them three times a day for two months and wean them slowly. They stay inside in smaller pens for the first ten days after birth. Then we carry them outside to one of these 30- by 50-foot pens.”

Tracy Calmes, chief bottle-feeder who can hold two bottles in each hand unless a fawn butts one out of her grasp, adds, “We leave the buck fawns on the moms. We want them to be wild and not socialized with humans too much. That can make for a dangerous situation when the bucks develop antlers and the rut season comes around. They can get pretty aggressive.” The gate system allows Tracy to bring a few fawns into a holding area until all of them have been fed and returned to the nursery pen.

Kevin describes the importance of mixing the feed precisely once the fawns advance beyond bottle-feeding. “Here is what usually happens; some people will have a 15-ton bunker outside, and they will call their feed mill and ask for 300 pounds of oats, 200 pounds of soybeans, 700 pounds of corn, and 250 pounds of black oil sunflower seeds in a mix, and get 10 tons of that mixture. They put it in a truck and drive for half an hour to deliver it and then auger it into the bunker. It may have 30% fiber, 5.5% fat, and 32% protein. It’s all in there, but it sifts several times. Then they add molasses and feed their deer. But the particular ration the deer are being fed that day might actually be 30% protein and 2% fat. If this is during antler development, the deer might not be getting enough of something and too much of something else until that mix is gone.”

The large display of the 920i weight indicator allows Kevin and Tracy to completely set up and configure the system through the front panel. The deer feed system allows up to 250 feed formulas consisting of up to 10 ingredients each.

That is why Kevin sat down with ADM Feed of Madison, Wisconsin, and built two pellets—a fiber pellet and a protein pellet. He worked with their nutritionists to get the right fat level, fiber content, and chelated vitamins. “Chelated vitamins are absorbed more completely and don’t go straight through the animals without breaking down. It’s not a secret recipe. If you do your homework and know what you want, ADM can build it.”

Kevin believes his 920i® programmable feed-mixing and batching system is the only automated system from New York to Texas that exists in the deer business. “This is the first one that I know of. One of the benefits of an automated system is getting exactly the same amount of ingredients in each batch you mix. If I’m not available to mix on a particular day, I can have Tracy mix, and I know there is no alteration in the nutrition the deer are receiving.

“We hand feed every day. The oil and molasses are added last. We go up to the 920i digital weight indicator and we have four or five batch options that we can choose from. We have a thousand-pound batch, a medicated batch, and I can add anything to that batch such as antibiotics. Then we mix in the oil and molasses to get coverage so the mix doesn’t dry out. The molasses covers the bitter taste of the minerals and makes it palatable so they’ll eat it.”

Beyond the perimeter fence, there are patches of torn-up sod. “A wild deer has been here. That patch is where he displayed dominance. With 52 does in heat, we’re bound to attract attention. One year a wild buck stayed here three days.”

Kevin points out a two-year-old buck that has a 285-inch rack this year. “At two, that’s incredible. He’s probably my best buck. I do not plan to sell yearling bucks or buck fawns from him because you never know. You might be giving your best animal away. I sell hunting preserve bucks and breeding bucks, doe fawns, and sometimes bred does.”

There is no doubt that Kevin and Tracy Calmes at Antler Valley Whitetail Ranch understand the importance of nutrition when it comes to raising whitetail deer. They make it a priority to continue researching and learning. Their newfound partnership with Rice Lake is one of the reasons a million-dollar buck could be in their future. 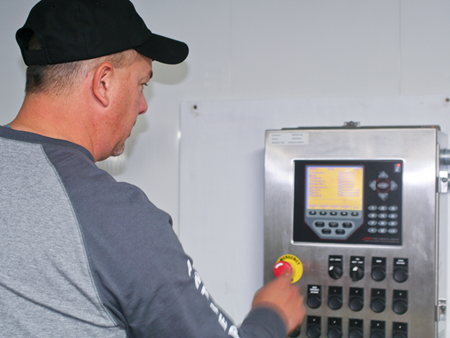 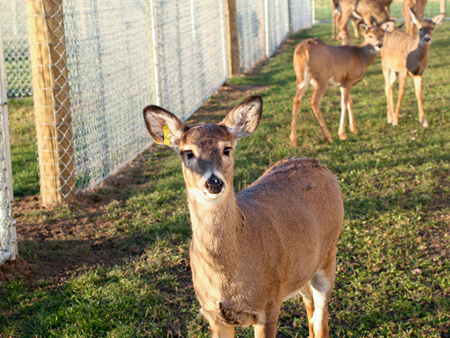 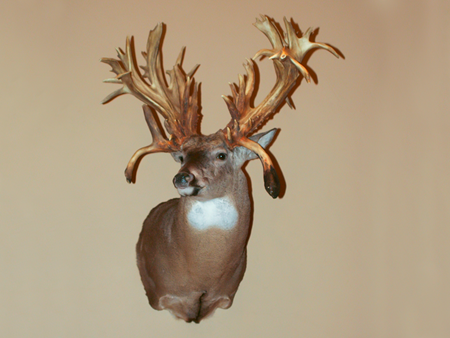 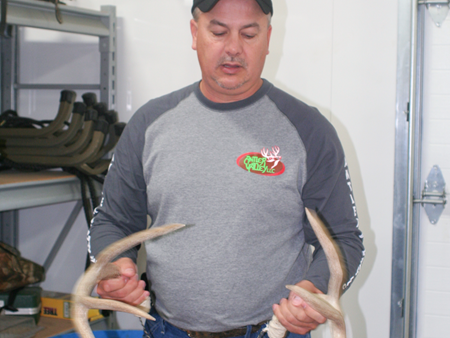 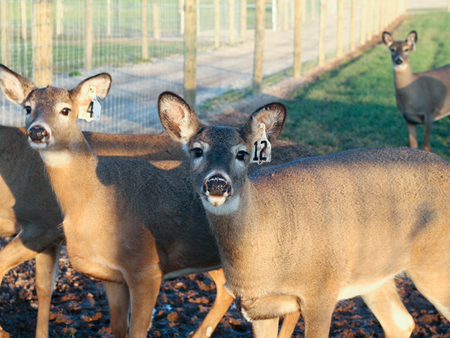 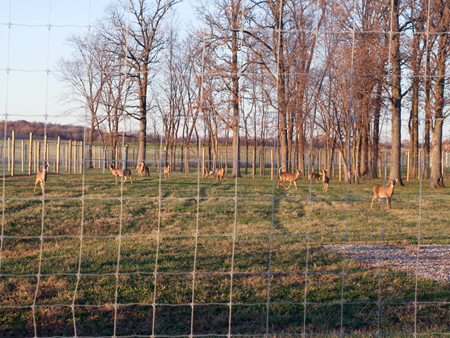 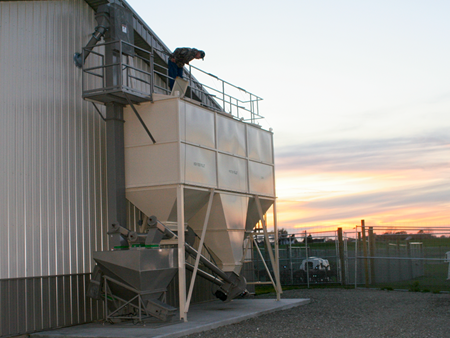 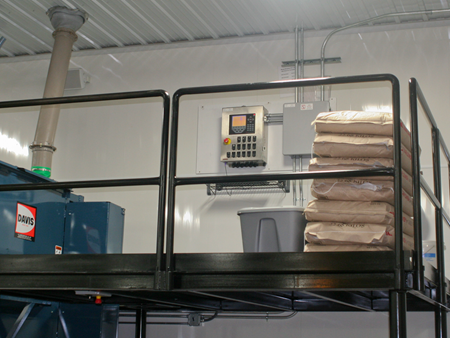 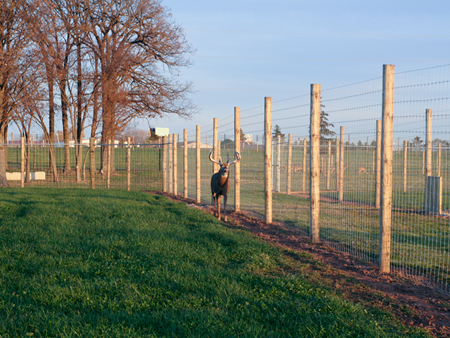 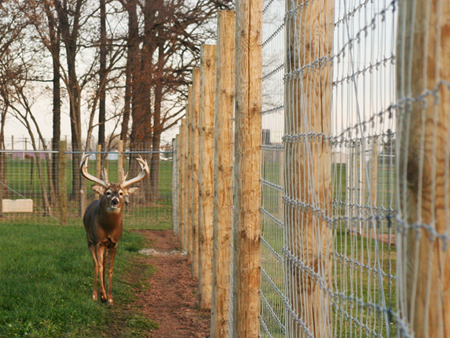