The manner in which a load is positioned upon a scale’s weighing surface can drastically impact scale performance and longevity. Most scales are designed to weigh a widely dispersed load. For example, a floor scale can repeatedly weigh large containers such as pallets because the load is spread out across a wide surface area. However, the same weight contained on a pallet can produce a much different result if it is not dispersed. If placed on a tote with casters, for example, the load creates focused points (rather than a dispersed load) upon the weighing surface. This is known as point loading.

Prior to selecting a scale, make sure you are aware of how the customer intends to use it. They may not be aware they are actually in a point loading application. Understanding their day-to-day weighing habits will help ensure they receive the scale best suited to their needs. 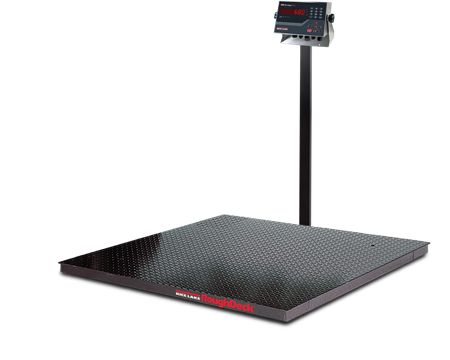 The RoughDeck Rough-n-Ready Floor Scale System combines the power and intelligence of a digital diagnostic junction and the durability of a RoughDeck floor scale.