Rough and Tumble Bundles of Joy

African savanna elephants are listed as endangered on the IUCN Red List of Threatened Species because their population decreased by at least 60% from the 1970s to 2021. This is why three zoos accredited by the Association of Zoos and Aquariums (AZA) helped orchestrate an elephant rescue mission in 2016 when Swaziland declared a state of emergency due to extreme droughts. Relocating the elephants was a complex logistical process with careful planning and cooperation between Hlane national park officials in Eswatini, formerly known as Swaziland, and the U.S. Fish and Wildlife Service.

Not only was Swaziland facing extreme droughts, but food supply scarcity and pressure on other wildlife conservation contributed to the urgency to relocate the elephants. Conservationists were concerned the elephants would be culled to combat the ecological risks created by the drought. After the U.S. Fish and Wildlife Service granted the permit for the elephants to be moved, the AZA worked to ensure they were quickly and safely brought to the facilities in the U.S. 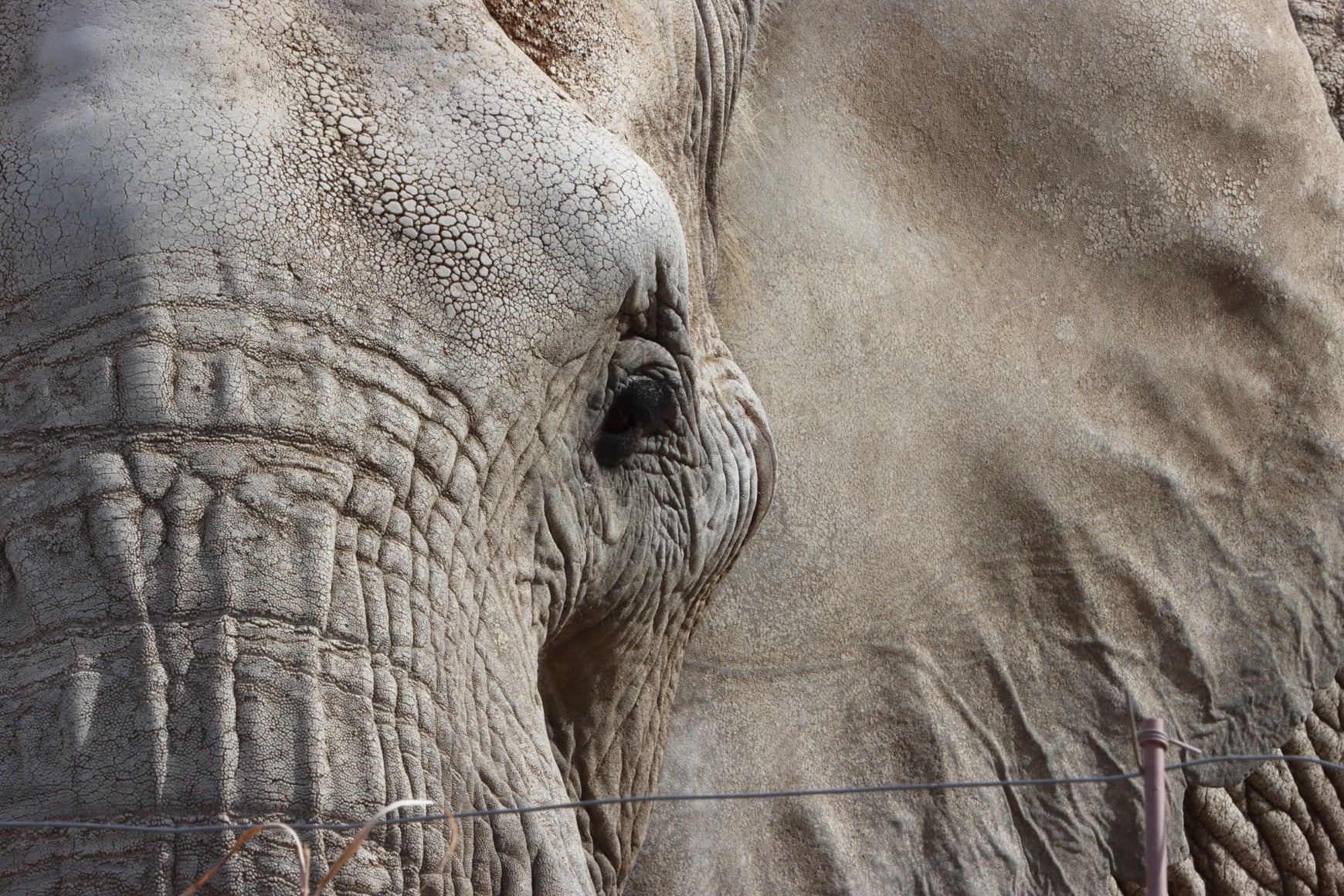 Omaha’s Henry Doorly Zoo and Aquarium adopted five females: Jayei, Kiki, Claire, Omma and Lolly, who live in the 28-acre African Grasslands habitat among other African wildlife. The AZA-accredited Omaha Zoo is considered one of the top five zoos in the world and they participate in the African elephant species survival plan (SSP) with other accredited zoos to help ensure the health and survival of the species.

Through the SSP, the Omaha Zoo hosted different males in the hopes the females of their herd would be impressed by their suitors. It can be difficult to introduce new elephants to established herds, but it can be especially difficult to introduce adult males because elephant herds are matriarchal. The Omaha herd was no exception, but they found a match when Callee arrived from Birmingham in May 2019. Callee was born at the Pittsburg Zoo in 2000 and weighs 9,080 pounds, making him the largest elephant of the Omaha herd. He quickly became an integral member of their herd, increasing their social wellbeing.

In March 2021, the zoo celebrated the fifth anniversary of the herd arriving in Omaha and animal care staff publicly announced Claire’s pregnancy. She was the first female pregnant by Callee and was approximately 13 years old, weighing 5,350 pounds. An elephant’s gestation period lasts 22 months, and zookeepers had been carefully monitoring Claire for the first year to ensure her pregnancy was healthy before sharing the exciting news.

A few months later, in October 2021, the zoo announced a second elephant was pregnant. Kiki, whose name means “favorite child,” was approximately 17 years old and weighed 6,450 pounds. Kiki’s pregnancy wasn’t as straightforward as Claire’s, keeping zoo staff guessing for a few extra months. Kiki and Claire had begun showing signs of pregnancy around the same time, though zoo veterinarians were concerned when Kiki’s hormone levels dropped. Veterinarians began performing weekly ultrasounds when Kiki was 11 months into her pregnancy to verify the health of the fetus. With the help of a reproductive elephant specialist, blood flow and a foot were seen on an ultrasound. Approximately a month later, a zoo veterinarian heard the baby’s strong heartbeat and staff were confident sharing the news. 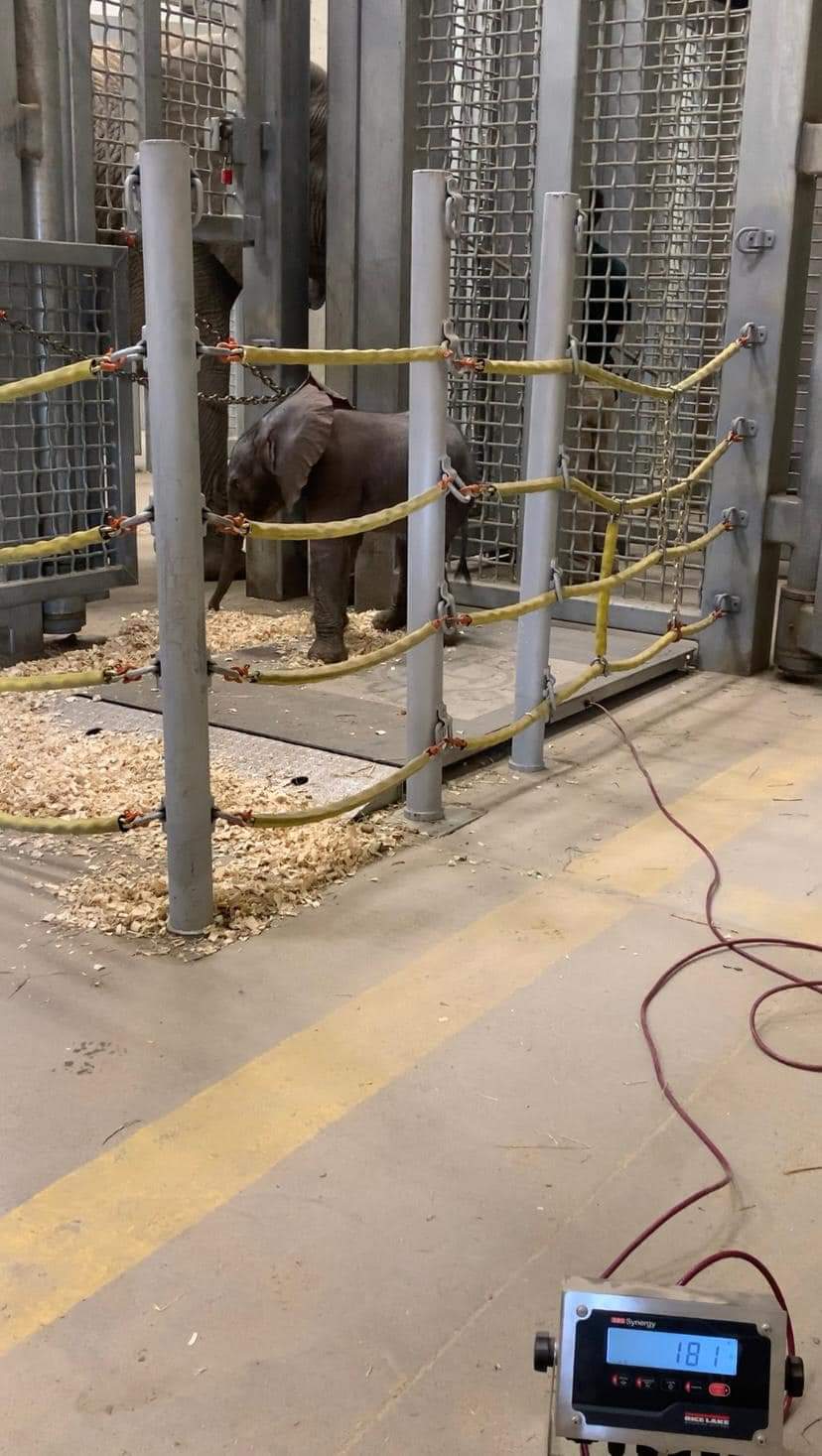 Elephant calves are expected to weigh 200 pounds or more when they’re born, already full of rambunctious energy and curiosity. Zoo staff welcomed Kiki’s calf on January 7, 2022. This first bundle of joy is a female named Eugenia who weighed 181 pounds when she was 10 days old. Eugenia is spunky and can often be found leading the older females around the elephant family quarters.

Just a few weeks later, on January 31, staff announced the birth of Claire’s calf, a male named Sonny who weighed 202 pounds when he was a week old. A playful calf, one of Sonny’s favorite activities while exploring outside of the barn has been smashing his face in the sunwarmed sand. Animal care staff will closely monitor the calves’ growth and steady weight gain to determine whether they are receiving enough nutrients from nursing or if they need intervention care. The calf scale is located in the calf training area, which is attached to a larger section of the elephant family quarters so the calves can freely explore it. Eugenia and Sonny can easily enter the training area with Kiki and Claire keeping close watch, though neither mom can enter this space. Even though the RoughDeck floor scale has a capacity of 5,000 pounds, Eugenia and Sonny will outgrow the calf training area before they reach that weight. Until the calves are old enough to begin training with solid food as rewards, staff use play and toys to create opportunities for the calves to step onto the 4-foot by 6-foot platform so they can record weights. 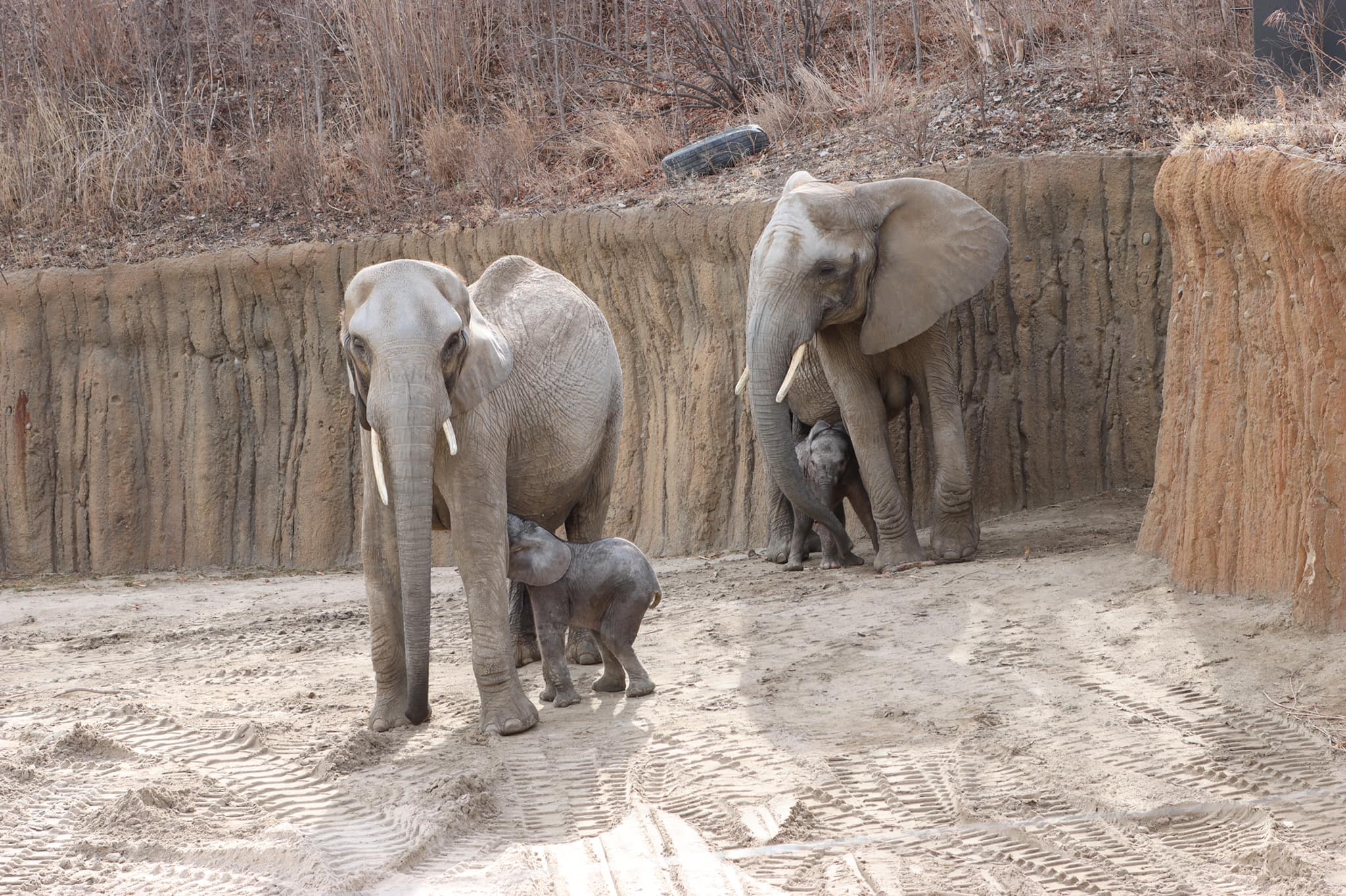 Kiki and Claire allow the other females to assist in mothering their calves, helping the younger Omma and Lolly learn how to mother calves they will have in the future. In March 2022, the Omaha Zoo announced that Lolly is pregnant by Callee and they will be welcoming a third calf in 2023. Callee’s previous interactions with the herd have staff confident that he will be able to spend a great deal of time with the calves as they grow, but staff will carefully evaluate the herd’s behavior to ensure everyone remains happy and healthy. Staff hope Callee will continue to bond with the females and father more calves in the herd, ensuring the RoughDeck calf scale is part of the African elephant SSP for years to come.